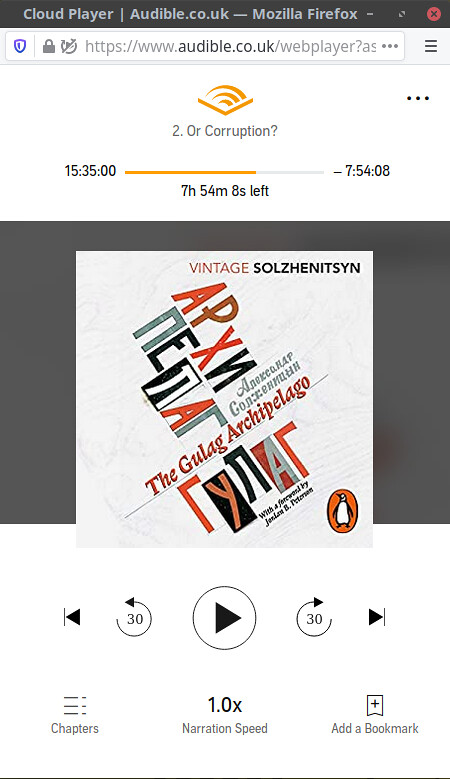 When time is a problem there's always a way for you to go on “reading” your favourite books! I've found that listening to them while you are doing your house chores or while you wait for someone or for the bus is a great way to enjoy the pleasure of “reading” a good book. It can even make a dull activity become enjoyable!

At the moment I'm enjoying listening to “The Gulag Archipelago”, by Aleksandr Solzhenitsyn. What a great book! What an enormous human experience!

Here is the summary on Audible page:

Brought to you by Penguin.

The audiobook edition of The Gulag Archipelago by Aleksandr Solzhenitsyn, read by the author's son, Ignat Solzhenitsyn.

The officially approved abridgement of The Gulag Archipelago Volumes I, II & III.

A vast canvas of camps, prisons, transit centres and secret police, of informers and spies and interrogators but also of everyday heroism, The Gulag Archipelago is Aleksandr Solzhenitsyn's grand masterwork. Based on the testimony of some 200 survivors and on the recollection of Solzhenitsyn's own 11 years in labour camps and exile, it chronicles the story of those at the heart of the Soviet Union who opposed Stalin and for whom the key to survival lay not in hope but in despair.

A thoroughly researched document and a feat of literary and imaginative power, this edition of The Gulag Archipelago was abridged into one volume at the author's wish and with his full co-operation. ©2019 Aleksandr Solzhenitsyn (P)2019 Penguin Audio

This is the type of book that every human being should be “forced” to read (or listen to)! I strongly believe that, if it were so, we would be living in a much fairer, honest and caring world!

If you, dear reader, haven't read (or listened to) it yet, I strongly believe that you should! It's, for sure, a remarkable work of art!

[I don't want to make any publicity to Audible. I'm not receiving any money from them. In fact, it was the service that better fitted my needs from the ones available in Portugal and I'm paying for it.]